Since he announced his intent to run as the Republican presidential candidate, Donald Trump never ceased to make it to the headline. His personality is as colorful as the life he has lived so far. He says the most outrageous of things and never fails to flaunt his riches. 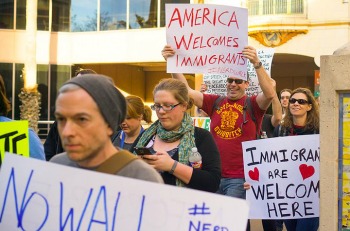 His campaign slogan was to “Make America Great Againâ€. American citizens who are fed up with the increasing terroristic activities happening everywhere pledged their support for him – Trump who promised to put America first all the time and boost the nation’s economy. He even disclosed plans of building walls on the border to prevent illegal aliens get into the country undocumented. Hence, it was not surprising that he issued a travel ban soon after his inauguration.

People were outraged and he earned the disapproval of many, both in and out of the United States. Now, let’s find out what else is new with the much-talked about travel ban:

The new ban, which goes into effect March 16, no longer restricts travel from Iraq, one of seven listed in the original order. The 90-day ban now is limited to Iran, Libya, Somalia, Syria, Sudan and Yemen.

As before, the order shuts down the U.S. refugee program for 120 days to give the federal government time to develop “extreme vetting” procedures to prevent terrorists from entering the country. However, Syrians are no longer subject to an indefinite ban, as they were under the first order.

The White House spent weeks drafting the revised ban, coordinating with the departments of State, Justice and Homeland Security to avoid the chaos that followed the Jan. 27 order. That one took immediate, snarling travel for thousands of people around the world and at U.S. airports. This time, federal agencies will have 10 days to prepare before the order goes into effect.

Aside from preventing certain nationalities from entering the United States, the U.S. also issued a travel advisory to its citizens on several South Asian countries.

In a world-wide travel advisory to its citizens, the United States has told those headed for South Asia to avoid Afghanistan altogether, avoid certain parts of Pakistan and Bangladesh, and mentioned “active”extremists in India.

The advisory replaced and updated one issued in September 2016 and with travel warnings already in effect for 41 countries â€” 16 in Africa, 2 in East Asia and Pacific region, 2 in Europe, 12 in Middle East and North Africa, 3 in South and Central Asia, and 6 in the Western Hemisphere.

“As terrorist attacks, political upheaval, and violence often take place without any warning, US citizens are strongly encouraged to maintain a high level of vigilance and take appropriate steps to increase their security awareness when traveling,”it said.

The threat of terrorist attacks directed at American citizens has resulted in the issuance of these travel advisories.

“US citizens should avoid travel to Afghanistan, as no region in the country is immune from violence. A number of established terrorist organisations, indigenous sectarian groups, and other militants pose a danger to US citizens in Pakistan. Extremist elements are also active in India, as outlined in a recent emergency message. Terrorists have hit a wide variety of targets in Bangladesh.â€

Let us just think that President Trump has our best interests at heart, thus these travel bans. But if you feel that you’ve had enough of the stress brought about by politics, you can always head out of the house and enjoy your time with family and friends at a fair and let the fresh air clear your mind of any doubts and worries.