Now that the United States has elected a new president, the world is watching for his next course of actions with an eagle’s eye. Not only is political activism growing within the country but the U.S. international relations is also a sensitive topic made even worse by President Trump’s controversial moves so far – think of immigration policies and the travel ban. 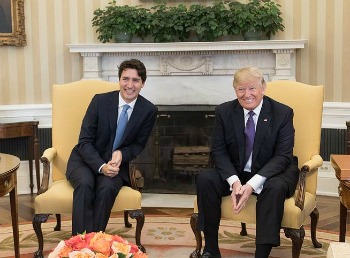 His words are uttered without caution and it has put the country in a negative light in the global arena. The country’s economy will undoubtedly suffer if he continues to speak and act harshly without thinking of the repercussions of his actions. After all, he is no longer just an entrepreneur but the highest elected official of one of the most powerful countries in the world.

The U.S. should think twice before severing ties with China or angering the Russian leader even further when the latter actually congratulated him during his unprecedented win late last year.

VLADIMIR Putin was tonight brought in from the international wilderness as new US President Donald Trump vowed to oversee a new era of “constructive cooperation” between the two rival superpowers.
In a phone call which will send shockwaves through Brussels the Republican supremo promised to work more closely with the Kremlin chief on global affairs, marking a significant thawing in the relationship between the US and Russia.
European Union leaders have spent the week blindly lashing out against the new President-elect in a desperate attempt to appear relevant to his new administration. But tonight’s call between the two world leaders, which was apparently warm and conciliatory, will only heighten their fears that Brussels is set to be sidelined by the new US government.
During a historic conversation, the Kremlin chief offered his congratulations to Mr Trump on his shock victory over Hillary Clinton and expressed his hope that relations between the pair would be significantly better than those he had with Barack Obama.
Mr. Putin told the 70-year-old President-elect that he respects him and hopes to enter into a successful political partnership in the future so they can work together to defeat extremism and terror.

However, Trump’s outrageous policies so far did nothing to assuage the worries of the leaders of many organizations and even that of other nations especially in China, Europe, and the Middle East. Worse, they even united against a common enemy – Trump himself.

European Union leaders voiced concerns about US President Donald Trump at a summit in Malta on Friday, saying they needed to stick together to face an increasingly uncertain global future.
The 28 countries showed a flash of unity by backing a plan to curb mass migration from Libya by helping the north African state´s coastguard to stop boats making the dangerous crossing to Italy.
But worries about the new US administration overshadowed the talks, with French President Francois Hollande slamming Trump´s “unacceptable” comments backing Britain´s decision to leave the EU.
“He shouldn´t meddle in in the European Union´s business,” Hollande told reporters.
“It is unacceptable that there should be, through a certain number of statements by the president of the United States, pressure on what Europe should or should not be.”
Other leaders said that while they wanted to maintain transatlantic ties they also had to be realistic faced with a president who has backed further exits from the EU and called NATO “obsolete”.

Even bolder statements have been issued by some European leaders as of late that reveal what they really think of the American leader.

The twin shocks of Brexit and Trump´s election have prompted deep soul-searching in the EU about its place in the world, and how to counter populist and eurosceptic movements that want to dismantle the bloc.
Belgian Prime Minister Charles Michel told Time magazine in an interview that it was time for the EU to take “very strong decisions”.
“In the last few months we have seen the Brexit, we have seen the election of Trump — it means that it is time now to move in Europe,” he said

And we can only hope that things will turn for the better when it comes to U.S.-Russia relations in the years to come.

The telephone call between Russian President Vladimir Putin and US President Donald Trump on January 29 was the first official contact between the two leaders since Trump’s investiture. The Kremlin has welcomed Trump’s promises to mend ties with Moscow, which have been strained by the Ukrainian crisis, the war in Syria and allegations of Russian meddling in the US elections.
All of these points of contention to one side, one of the key objectives behind Trump’s outreach to Moscow is whether he can persuade Russia to turn away from Iran. In an article for Bloomberg, Eli Lake states: “The Romanovs humiliated Iran in the 19th century with punitive treaties. Last summer tensions rose briefly when the Russians acknowledged they were flying air missions out of Iran into Syria. Iranian mistrust of Russia can be exploited with deft diplomacy.â€

The new president has much to learn regarding international diplomacy. So, he should never take things lightly. His habit of saying things without thinking will not work in the global arena and the country’s international relations may eventually suffer (as if it is not already suffering right now).

The future of the United States (well, for the next four years that is) lies in his capable (?) hands. His cabinet and advisors should do their job and guide the President on how to conduct himself as one to make up for his lack of experience as a public official. Millions of lives depend on his sound judgment – and whether you voted for him or not – you have no choice but to support his leadership and do your part in helping the country by being a responsible American citizen in everything you do.