Skyscrapers keep sprouting everywhere. While we all should be happy for seeing the bustling and sprawling urbanscape as a sign of progress and prosperity, it is taking a big toll on our planet. As if we are not facing enough problems in our lives, environmental issues here and there are simply hard to ignore. 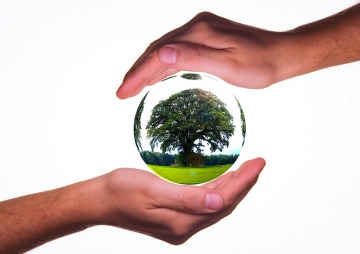 This planet is our only home and we should do our part to protecting it from further harm, lest we all end up dead. Seeing the world we live in now be consumed by urban living, pollution, violence, deteriorating Mother Nature, and so much more, it is scary to think what is waiting for us in the years to come.

Our world is dying and we are too self-absorbed with our own life dramas that we fail to give it the attention it deserves. After all, every effort counts – big or small – so let’s all put our differences aside and unite for a common cause. Who knows, you may even start to see the world in a different light.

Unnecessary lighting is also a drain on the economies and environmental wellness of cities. According to data sourced from the U.S. Department of Energy in 2011, 13 percent of residential electricity use in the United States is for outdoor lighting. Bad outdoor lighting wastes 0.5 kilowatt-hours of energy per house, per night, which equates to enough energy to power a 50-inch plasma TV for one hour. In addition, the International Dark-Sky Association believes that at least 30 percent of all outdoor lighting in the United States is wasted thanks to unshielded light on streets and in parking lots.

Even in cities, dark sky policies could cut energy use, save money, and reduce carbon emissions. While Laurin acknowledges that completely retrofitting large urban areas like Chicago or New York City to fit dark sky accreditation would be a “daunting taskâ€â€”if not impossibleâ€”the “simple difference in putting a shield over the light, pointing the light down, and putting the light lower to the ground”would reduce light waste. Illuminating only the places that need it and turning off unnecessary lights would also help preserve darkness.

And the fact that the planet is dying is not a joke. Mankind has managed to incur some serious damage to Mother Nature and the extent of the damage is incomprehensible.

Some 80 percent of cauliflower corals are dead off West Hawaii. Gigantic colonies of mounding coral have succumbed â€” to the tune of 93 percent. As these structures disintegrate in slow motion, scientists worry the dead masses of calcium carbonate will break off and roll around, pulverizing the surviving corals.

But in the immediate aftermath of the bleaching â€” if you don’t look too hard at the devastation sleeping under the algae â€” you could almost pretend things are back to normal. Once bleached like bone, some 50 percent of the coral has recovered off West Hawaii, the state Division of Aquatic Resources determined last year.

Now the question is, what is the government doing about it? Environmental conservation should be at the top of their list because nothing else matters if the planet becomes unlivable for all of us.

As Trump’s sputtering political bulldozer takes aim at public lands, the environment and the climate, conservation advocates are preparing to throw up a few legal roadblocks that could delay for years implementation of the administration’s anti-environmental agenda. The battles Trump has unleashed will begin a new era of uncertainty for American energy companies, even as the market-driven shift to renewable energy continues.

The first lawsuit against the Trump administration’s attack on the environment has already been filed in U.S. District Court in Montana, where Earthjustice attorneys, on behalf of citizen conservation groups and communities, including Native Americans, are seeking to block Interior Secretary Ryan Zinke’s decision to repeal a coal mining moratorium on public lands.

Under former President Obama, the Interior Department adopted the moratorium to give experts a chance to review the coal leasing program, both for its climate impacts, as well as for financial implications to the American people.  In a draft review released in January, the Bureau of Land Management found that more than 10 percent of all U.S. greenhouse gas emissions, come from coal developed on federal lands.

It’s hard to tell what the next four years will be like when the new administration barely understands what is important and what is not. Our environmental issues like climate change and global warming need immediate action or risk inflicting more irreparable damage that can’t be undone in the years to come.

Earth is our only home. Although we can no longer undo the mistakes of the past, there is something we can do now. We can correct our evil ways and show it that we care through conservation efforts, recycling trash, conserving electricity, finding other energy sources, planting more trees etc. A little good deed each day can go a long way in preserving the environment as well as the wildlife that thrives in it.