Feel Good About Yourself! Your Health Is Better Than You Think!

Finally–a study that makes you feel good about yourself even if you don’t spend an hour a day at the gym! According to a recent report from the Cooper Institute for Aerobics Research in Dallas, you can skip the treadmill and stay just as healthy by leading an active life doing everyday activities. 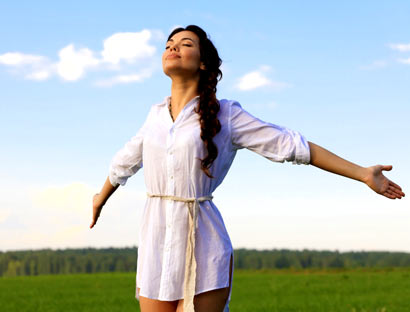 Researchers at the institute monitored 235 sedentary women and men between the ages of 35 and 60. One group spent 20 to 60 minutes a day doing vigorous exercise such as swimming or biking; the other group simply made sure to do 30 minutes a day of “lifestyle” exercise–raking leaves, climbing stairs. At the end of six months, members of both groups showed similar improvements in their cholesterol levels, blood pressure, and body-fat percentages.

The study is significant because most of us find it easier to incorporate small changes into our schedules than to follow a formal, prolonged, rigorous exercise regimen. And the simpler a routine is to work into your life, the better the chance that you will stick with it.

Any change in our breasts is disconcerting. But one symptom–pain–maybe nothing to worry about, according to a recent Dutch study.

The study looked at the mammogram results of nearly 1,000 women whose only complaint was pain. In 87 percent of cases, X rays were normal. Biopsies were performed where warranted by the mammograms, and of the four women who did turn out to have breast cancer, all had had abnormal X rays. Most encouraging, when researchers compared these women to a control group who had no symptoms, they found no greater rate of breast cancer.

Although any breast symptom should be checked out by a doctor, in the great majority of cases, pain without any other physical finding is not a significant warning sign for cancer.

Last year there was great excitement when studies showed that the drug tamoxifen could cut breast cancer risk nearly in half. Now researchers want to compare tamoxifen to another drug, raloxifene (Evista). The goal is to recruit 22,000 postmenopausal women at high risk of breast cancer in studies to be based at over 200 medical centers across the country. Interested? Call the National Cancer Institute’s Cancer Information Service at 800-4-CANCER or log on to the NCI’s site: cancertrials.nci.nih.gov.

It is well-known that alcohol consumption during pregnancy can cause health problems for the baby. Now a study from Denmark shows that drinking can reduce your chances of getting pregnant in the first place.

A group of 430 couples were studied for six months or until the woman became pregnant. Medical details–menstrual cycles and sperm counts–were recorded each month, as well as alcohol use. The results were startlingly clear: Women who consumed an average of 11 to 15 drinks a week in a cycle had only a third the chance of conceiving that month as women who abstained. Moderate drinkers–those who consumed six to ten drinks a week–were half as likely to conceive. And even light drinkers (one to five drinks a week) cut their chances of becoming pregnant by a third.

The obvious conclusion? If you’re trying to conceive, it would be sensible to abstain from drinking or at least keep your intake very modest.

Q My husband constantly clears his throat. Is this harmful? How can I get him to stop?

A When you have a cold, mucus increases and gets thicker, settling on the vocal cords. This causes a reflex action of coughing or clearing the throat. For the short duration of a cold, no real harm can be done. But if the “ahem” routine becomes a habit, you can damage your voice.

Vocal cords are muscles. Each time that you clear your throat, you literally bang those muscles together–and they can become bruised or inflamed or develop small calluses that can cause temporary, or sometimes even permanent, hoarseness.

It’s important for any chronic throat-clearer to make a concerted effort to break the habit. The best way is to drink lots of water, which will thin the secretions. Then, each time you feel the need to clear your throat, swallow instead. That way, you’ll stop straining the cords–and save your voice.